Skip Ashby in a field on his farm in Marshall Virginia

What is your instrument of choice and what attracted you to it?

I play the fiddle. My dad, John Chilton Ashby, was a great long-bow fiddle player for many years. He started the dance band, the Free State Ramblers, in 1937.

I started out playing guitar and bass. We got to the point where we had to have another fiddle player when dad died so that’s the reason I started fiddle; I loved it, too.

The fiddle is not an easy instrument to play, there’s just no frets, there’s no place to start really. You just have to kind of find your way around. I never had any lessons, so it was a trial-and-error thing for me for many years. I listened to Dad’s recordings, and of course, I listened to him most of my life so I knew most of the tunes I wanted to play; I knew how they went.

Tell us about one of your favorite songs and why you like it.

“Blue-Eyed Girl” I like as well as any. There are numerous tunes, dozens, it’s hard to really know. There’s another one my dad played a lot–he wrote it–called “Ashby’s Breakdown.” I don’t know if I have a favorite tune. I like the tunes that you can square dance to and those for the Paul Jones dances, contra dances. Paul Jones dances are big round circle dances.

How did you get into playing music?

I grew up with music, my dad and all my uncles played too. We had mini sessions right in this room [the living room of his house]; after my grandmother died, we played in here for years. . . . Lots of music has been played in this old house. 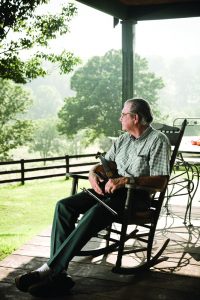 It has been great, it really has. I have met lots and lots of people over the years. We [Free State Ramblers] played for the folk festivals in D. C., at the Library of Congress, and the Fourth of July dances at the Smithsonian. We played for Senator Byrd, a good fiddler, who played for us some of the time, too. This community has been a real great part of my life.

What do you think is the relationship between Virginian folk musicians and the area that they come from, such as the Piedmont? Do you think it influences their musical style and preferences?

We’re losing a lot of the traditional sounds of the region because of the internet and exposure to so much music. What we grew up with, more traditional long-bow fiddling, is becoming a lost thing. A while ago if someone was from Southwest Virginia or from Missouri, you knew where he was from by the way he played. This is all being lost. At a contest in Clarkesville, Tennessee, there were eight or 10 young fiddle players, really top notch fiddlers. When they went out there on stage to play, you could hardly tell one from the other. When they were outside practicing, one would correct the other [by saying], “No you need to put this in there,” or, “You need to do it like this.” With the older players, they’d hear a tune on the radio, and try to do it as close as they could remember; it may not be exact or have all the notes. It’s just a difference in the way we communicate.

What can save these musical styles?

I don’t know what the answer is. A victim of the times you know. Once something like that is gone, its hard to revive it. As far as a person developing his own style, I don’t see much of that happening any more; there’s too much exposure to everything–to all different types music and fiddle playing.

What musicians do you think have had the most impact on you and your devotion to music?

First of all, my dad, needless to say. After him, there was a wealth of different musicians I grew up around. There was a guy down on the water that played banjo I liked a lot, Hugh O’Bier. He had a different style and his own thing going on. All the guys who used to come came around, they all influenced you, and you had a great time being with them playing music. The only person that I’ve tried to pattern, what little bit I can do, is my dad’s fiddling style.

There was R.B. Frazier–I learned a lot of his music from Dad, and Pete McMahan, a Missouri fiddler. August Smith was another one though he wasn’t from around here. There were a lot of them at one time; guess I don’t travel in the right circles now.

What makes a piece of music distinctly folk, or Americana, or Appalachian?

I think primarily the musician or the person listening to music will categorize it the way he perceives it. I don’t think that any of the old traditional music comes under “folk” music. But, it depends on the person. You can take any one of the old tunes and put it into any format you want–they all come from the Irish and Scottish tunes. I play old time Virginia traditional fiddling oriented towards dances—contra, square, Paul Jones—pretty much dance music.

Do you have any of your music recorded?

No, but my dad had three recordings, all done with County Records: “John Ashby—Old Virginia Fiddling”; “Down On Ashby’s Farm”; and “Fiddling by the Hearth”; the picture for that one was taken right here in this living room.

Share on FacebookShare on Twitter
« 13 Ways of Looking at Old Rag
A Sport and a Pastime: Photographer Doug Lees »