Not your typical Piedmont farmer 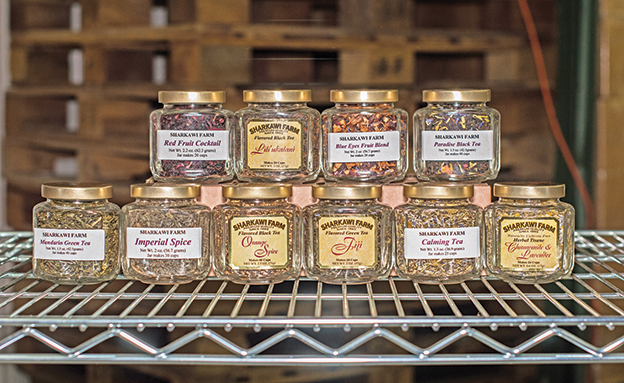 “First, I imagine the tea mix in my mind. Then I start mixing tea leaves with flavors like orange, anise, and hibiscus,” Sabry Alsharkawi carefully explains, surrounded by hundreds of boxed jars of teas, herbs, and spices in his 4,800-square-foot workhouse on his Fauquier County farm. “You cannot find these teas anywhere else in the world,” he adds with a sparkle in his eye. 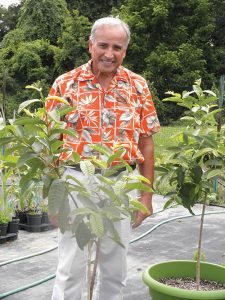 Since 1985, Alsharkawi has grown herbs and flowering plants organically in Broad Run. When he visited Virginia farmers’ markets in the early 1980s, he found no homegrown, organic herbs, spices, or teas. Voila! He had found a market niche. An agricultural engineer by training, today Alsharkawi makes and sells 20 teas such as Jasmine, Paradise Black, Fiji Green, Imperial Spice, Blue Eyes Fruit Blend, and Relaxing Tea. His black and green teas contain caffeine; the herbal teas do not. His Cold Comfort (as in a bad cold) tea boosts the immune system, he contends. “It’s a lifesaver. People buy it by the case.” Roger Miller, a Fairfax County customer, raves about the Red Fruit Cocktail Tea with elderberries, which he says is “especially refreshing served chilled on a hot day.”

Alsharkawi grew up drinking tea in Egypt, a tradition deeply embedded in the culture. “If you visit someone in Egypt today, they will serve you tea without asking,” he explains. “Egyptians drink eight to ten cups a day.” He speaks deprecatingly of American brands of “so-called tea” like Lipton and Nestea: “It’s just dust—powder. If you really look at what’s in the tea, you’d never drink it.” He also advises, “If you do not see leaves, it is of bad quality. A good tea is strong and smooth, a joy to drink.”

He’s even a tea historian, explaining that tea originated when a Chinese emperor was drinking hot water and a tea leaf fell off a tree into his cup. The emperor sipped it, delighted in its taste, and instantly, tea as a beverage was born. It has evolved into a favored beverage, enjoyed around the world for millennia. Traders took tea from China to Egypt about 2,000 years ago, Alsharkawi believes. 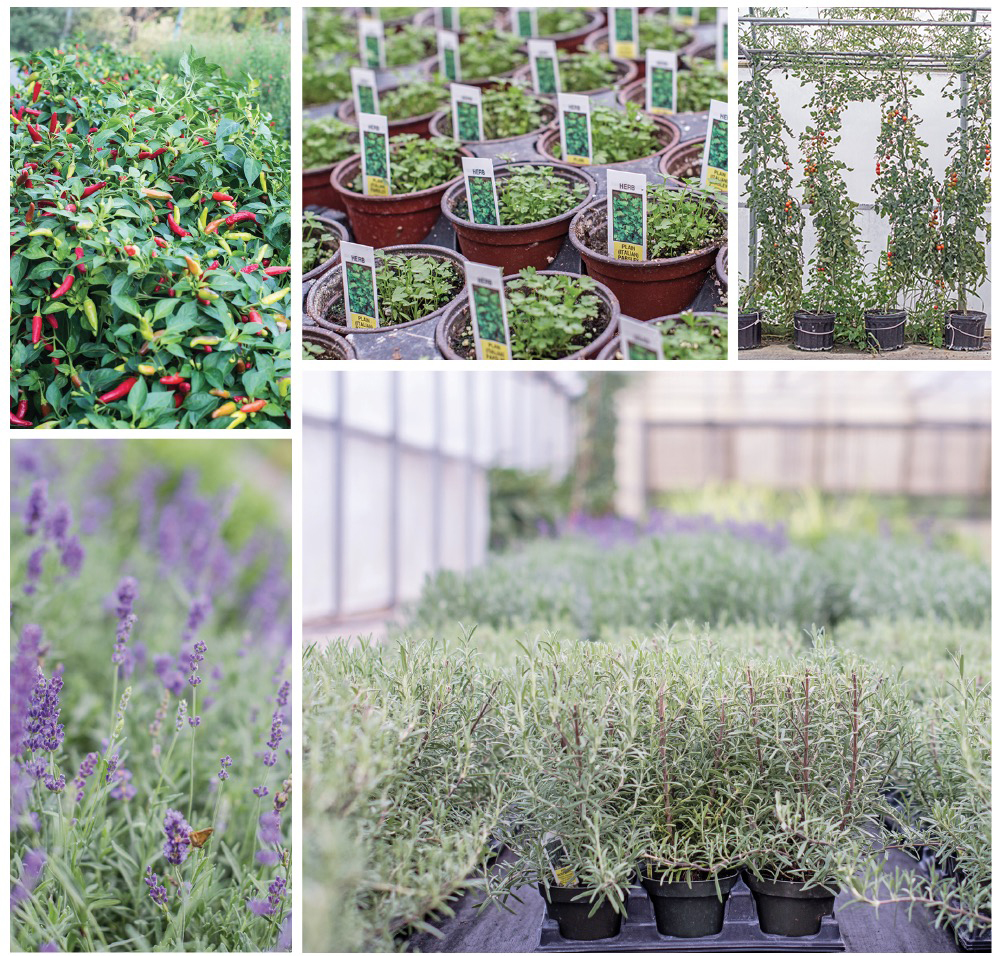 A sampling of the vegetables and herbs grown at Sharkawi’s farm, including peppers, a staggering array of fresh herbs, tomatoes, and lavender. By Lita Trimming

From April to November, his greenhouses also bulge with rows of dense green plants that include lemon grass, seedless cucumbers, nasturtiums, rhubarb, Japanese and patio eggplants, and fig and guava trees—all sparse in typical American groceries. He also nurtures some flowering plants: phlox, hibiscus, and meadow sage. By late August, he has sold 6,000 pansies. He also makes and markets seasonings for lamb, seafood, and other meats. By the end of November, customers have swooped up cases of herbs, teas, spices, and seasonings, preparing for winter.

On Sharkawi Farm, there are no corn fields, haying baling machines, looming silos, or grazing Angus cattle. “I’m small. The big commercial guys produce huge quantities. They focus on quantity. I focus on quality,” he emphasizes. Miller concurs: “He has such a green thumb that I have never seen
plants as hearty, full, and beautiful as the plants he sells.”

Growing herbs organically requires constant attention, the careful planting of the seeds on top of the soil so the sun can cause germination. Alsharkawi mists them every hour for 7 – 10 days; If the seeds dry out, that crop’s gone. He hand-irrigates plants in one greenhouse and uses drip irrigation in the other. Commercial producers rarely invest the time and attention in that kind of hands-on, up-close agriculture. By using products like neem oil and insecticide soaps for pest control, he believes he is offering safe products. “I like the idea of being safe, not greedy,” he says.

Brenda Jordan has shopped at his stand for ten years because “he really knows his products and he gives you tips on how to grow them.” Mount Vernon-area resident Som Zimmerman buys his super-chili peppers to make green papaya salad, a favorite from her homeland, Thailand. “He has very healthy products,” she maintains. Miller takes home parsley plants to provide host plants for black swallowtail butterflies. Alsharkawi once had a customer who spent $120 a week on parsley to support butterflies in her garden.

“It’s not an easy business,” Alsharkawi points out. “Mother Nature does not cooperate all the time. Wind and hail can quickly destroy plants.” The hours are long in the growing season also; from Wednesday through Sunday, he rises at 4 a.m., drives to a farmers’ market, sells his wares, drives home, and works until 6 or 7 p.m. to serve five farmers’ markets in Warrenton, Dale City, McLean, Annandale, and Mount Vernon. He has to load and unload flats and individual plants from the greenhouse into the van, from the van to the farm stands, from the farm stands to the van, and from the van to the workhouse. “I only rest between customers,” he sighs.

With his academic background, he understands various plants’ requirements and persnicketiness. Why aren’t tea plants grown in the United States? They need a high elevation, an even temperature all year (no dramatic seasonal shifts), and a constantly misty environment. He imports tea leaves from India, Ceylon, and Japan. 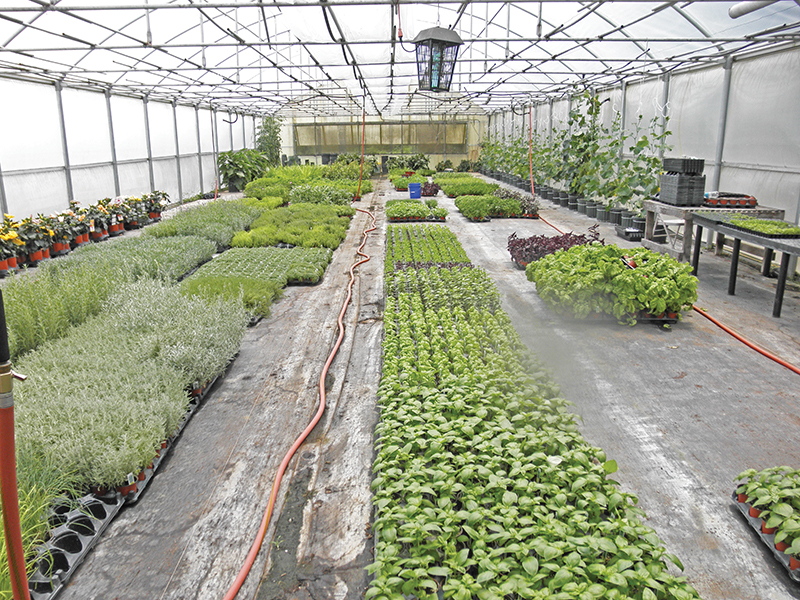 Not only is he selling unique teas, herbs, spices, and seasonings, he designs the jars they come in and owns the exclusive rights to the design.

Alsharkawi came to the United States for love. He met his wife-to-be, Salwa, a U.S. resident, when he was studying agricultural engineering in the United Arab Emirates (UAE) where she was teaching computer science. He was researching plants that could adapt to the harsh conditions of the UAE, where temperatures can reach 120 degrees. Today, Salwa is an architect. They have three adult daughters: one is an aerospace engineer; one, an Army chemical specialist; and the third, a Fauquier County school teacher.

Share on FacebookShare on Twitter
« Arts in the Piedmont: The Charlottesville Arts Scene
The Overlooked Beauty of Autumn »