A sublime mix of beauty, athleticism, and ferocity, the Ruby-throated Hummingbird is the smallest bird—and the only hummer—that breeds in the Eastern United States. Mostly bright green on top and white underneath, its common name comes from the glittery, iridescent red feathers on the mature male’s throat. 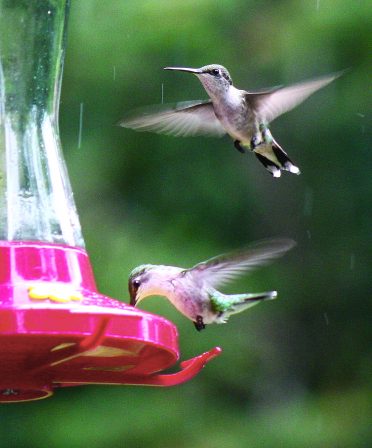 At less than three inches long and weighing less than a nickel, the ruby-throat’s ferocity belies its size. Males will defend a flower patch or a hummingbird feeder so fiercely they seem to forget about eating. I once saw a mature male body-slam an immature male perched at a feeder, leaving the latter dazed and hanging upside down like a bat until I lifted it up and it flew off. In midsummer, when more than a dozen hummers can compete for space at the feeders on my deck, I often find myself in the middle of aerial combat among lilliputian jet fighters, narrowly escaping being collateral damage as they whizz by.

The metabolism of a hummer—roughly 100 times that of an elephant—is thought to be faster than any other animal. Amazing aerial athletes, hummers fly from 25 to an estimated 50 mph forward, beating their wings at about 53 times a second. They can also fly sideways, backward (briefly), and hover and fly vertically like tiny helicopters. Ruby-throats often hover in my windows when the feeders are empty, seeming to nag me to refill them or hover in front of my face, perhaps assessing a potential threat or competition, or just being curious.

Courtship, mating competition, and defense of food and nests is where the Ruby-throat really shows its athleticism with a repertoire of aerial displays, most of which both genders use. Mating is a hit-and-run affair, with the males not sticking around to raise the young. In Virginia, females typically raise two broods of two young each, defending the area immediately around the nest from intruders. They use spider silk and plant down to construct the nest, which is about the size of a quarter. A finishing touch of lichen flakes helps camouflage the nest on the ruby-throat’s preferred nesting site: a lichen-covered tree branch.

Male ruby-throats arrive here in the Virginia Piedmont around the first week in April, some on their way further north. Females appear about a month later. By mid-July, when the females are done breeding, the males start flying south. Females follow around midsummer, after their second brood has fledged. Youngsters may stick around through early October to feed, some doubling their weight for the migration journey.

Ruby-throats have historically wintered in Mexico and Central America but have extended their range nearly 200 miles northward because of global warming. While some follow the Texas coast when migrating, “most apparently cross the Gulf, typically leaving at dusk for a nonstop flight of up to 500 miles, which takes 18–22 hours, depending on the weather,” sources say.

When it comes to the ruby-throat’s diet, nectar was long thought to be the main, and perhaps only, food they required. Hummers have coevolved with their preferred source of it—flowering plants with tubular blossoms that are rich in the sugary liquid—helping to spread the plants’ pollen in the process. 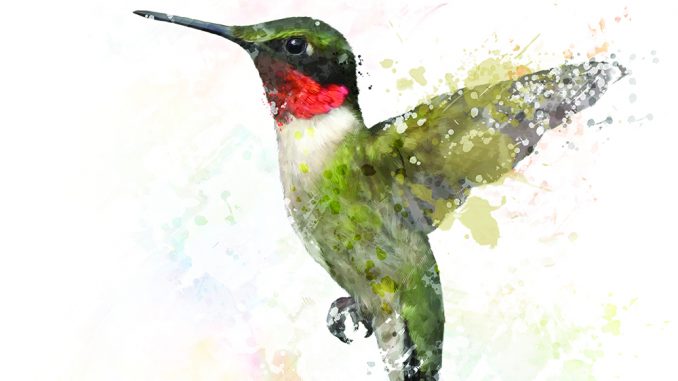 With their long beaks and tongues, and short legs, hummingbirds can drink the nectar while hovering. And each hummer also has a special channel in its throat that bypasses its stomach and delivers the nectar directly to its intestines, where it is rapidly absorbed. Ruby-throats have also been known to chow down on other sugary foods, including sugar water we provide in feeders (see sidebar), tree sap, and the waste of some insects.
Despite their nectaring adaptations, “nectar and sugar water are merely the fuel that gives them the energy to catch insects, which are far more important” says hummingbird expert Dr. Bill Hilton Jr., at Hilton Pond Center in South Carolina, who has led the banding of thousands of hummers. As he points out, sugar does not suffice to build muscle and bone, which is especially important in the development of young birds. Protein and other nutrients are required for that and other functions, and those mostly come from small insects, which hummers catch in midair or glean off plants.

Fast as they are, ruby-throats do have predators, including robber flies and Chinese mantises, snakes, predatory birds, largemouth bass, frogs, large orb-weaving spiders, and bees and wasps. Weather and humans, and the cats and pesticides we’ve introduced into the environment, also take their toll.

The best way to help hummingbirds get nectar is to plant native flowering plants. These will not only provide nectar but attract protein-rich insects, which are a critical part of the hummers’ diet.

To make a nectar substitute for hummingbird feeders, boil refined white sugar in water (spring water is best) in a 1:4 ratio. Do not use other sweeteners or add red dye, which can be dangerous to hummers. Hang the feeder out of the reach of cats and other predators, away from bird nests, and preferably in the shade. Clean all feeders with a 10 percent solution of bleach at least once a week—more often in hot weather or if mold appears in the feeder. See more about feeding hummers, including a list of preferred plants, at the Hummingbird Society’s website.