Virginia’s Historic Garden Week began in 1927 as a way for a local garden club to raise $7,000 to save trees planted by Thomas Jefferson. Today HGW spans throughout Virginia, opening houses and gardens from April 22–29.  All proceeds continue to benefit restoration and preservation for houses and gardens in Virginia.

Tickets (which are available by clicking here) are $25 if purchased before April 12, after which time prices increase to $35. One may also purchase single-site admissions for $15. Between 1–3 p.m., complimentary refreshments are served at Airlie and Huntley. Certain restaurants in Warrenton’s historic district offer lunch specials to attendees as well; for more information, consult the downloadable guide by clicking here.

For more information, contact Kathleen Nevill, the chair of Warrenton’s garden week this year, by phone (540-222-4676) or email (warrenton@vagardenweek.org) 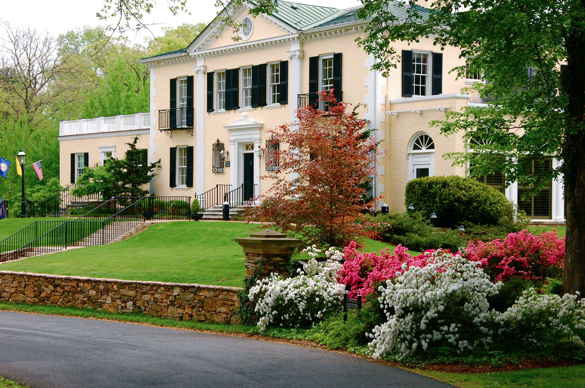 Initially built in 1899 in the American Georgian style, reminiscent of the original owner’s Philadelphia roots, Airlie House was rebuilt on the same foundation and in the same style but with two stories instead of the original three following a re in 1924. A central staircase dominates the broad entrance hall, splitting at the landing into two ights as it climbs to the second story. Now a conference center, the entrance hall, small sitting room and porch (now glassed in) preserve the welcoming ambiance of the original home. The entrance to the grounds follows a small stream as it winds through a park graced with old-growth trees leading to the property’s formal garden enclosed within a fieldstone wall. Axial orientation and boxwood hedges bordering the beds reveal the bones of the old garden. In 1998 a four-acre organic garden was established to provide food for the Airlie restaurant as well as local families and to educate visitors about the value of using food grown locally. 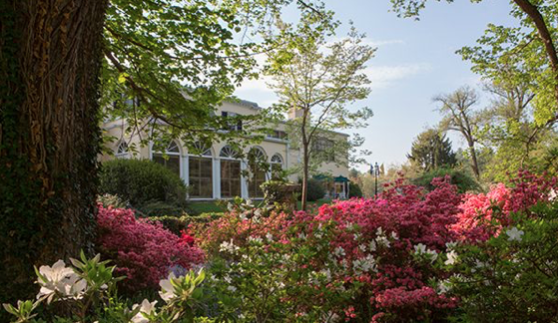 Another view of Airlie

Giant tulip poplars dominate the treeline along the drive approaching the stately Federal-style brick house built in 1922 by Irwin Fleming for Colonel Robert Wallach. A Doric portico opens into the broad central hall containing Chinese gurines from the Tang era and bronze reclining greyhounds by Hungarian-American sculptor Hunt Diederich. French doors open directly onto the terrace and garden connecting the interior and exterior spaces. A cross-hall opens on one side to a porch and small garden enclosed within an old boxwood hedge. On the opposite side, it leads past the staircase to the magisterial dining room, known to have seated 65 on one grand occasion. Both drawing room and dining room contain paneling from Mrs. Wallach’s father’s house in Washington. A small library with Pompeian red paneling contains Chinese portraits and gurines. The grassy terrace at the rear of the house terminates in a low brick wall with steps down to the large lawn and delicate iron gate opening to the elds and mountains in the distance. Family weddings in the garden inspired various renovations resulting in the deep herbaceous borders on each side backed by boxwood and a wall made from bricks original to the old hotel at Fauquier White Sulphur Springs. Brick outbuildings include the old summer kitchen, garages and servants’ quarters. Hopefield is in a conservation easement and the house is on the National Historic Register. 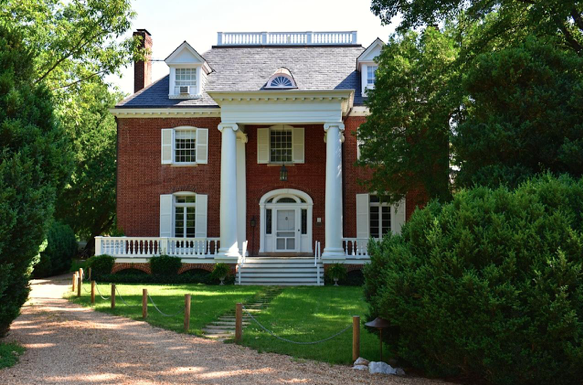 Colonel Elias Edmonds, a Revolutionary War veteran, built his Federal-style house in the late 18th century using brick imported from England. The façade is laid in Flemish bond brick and the sides in three-course American bond. A subsequent owner replaced the early frame addition across the back with one made of brick. An impressive Ionic portico on a podium base was added to the front in the early 20th century to match the Colonial Revival style that characterizes Loretta today. A broad staircase ows down from the third oor and into the large center hall. Pocket doors lead to a drawing room on one side and dining room with original paneling on the other. Matching replaces trimmed by a Doric mantel face each other across the open space. The imposing entrance is visible from the the narrow road flanked by old-growth trees that leads to the property. The surrounding garden features mature boxwood, heirloom flowerbeds and specimen trees, including an ancient poplar. Several outbuildings, including a brick smokehouse converted to an of ce, and an old well with shingled roof, attest to the self-sustaining nature of houses in rural Virginia more than 200 years ago. 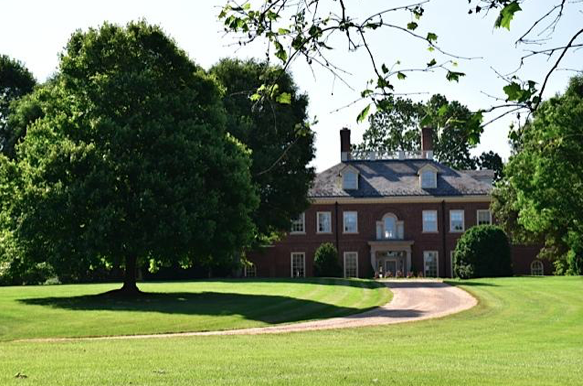 A mile-long driveway through the Capability Brown-inspired landscape gently curves around a lake as it approaches the brick mansion located on a slight rise. The house, built in 1987 by the Philadelphia rm, Tony Atkin and Son, is a spiritual child of the eighteenth-century James River plantations with a central block and two smaller dependencies built of Carolina brick. The interior also recalls the formal plan of its predecessors with a gracious central hall, curving staircase to one side and large openings into dining room, drawing room and library. Pine floors salvaged from tobacco warehouses and walnut millwork, some of which was cut from the farm, continue the link with the past. The furnishings, a mix of antiques and contemporary pieces, t comfortably into this gracious country house. A formal rose garden on one side is balanced by a small garden on the other side lled with bulbs, vegetables and herbs. Sculpture enlivens the grounds. There is armillary sphere in the rose garden, a Jack Russell terrier piece that appears to be “digging up” plants in the informal garden and an abstract marble on the terrace. A wisteria-covered pergola borders another garden. Walk through the gate forged by local artist Nol Putnam to a broad lawn containing a ginkgo grove, weeping crabapple and a dove tree. 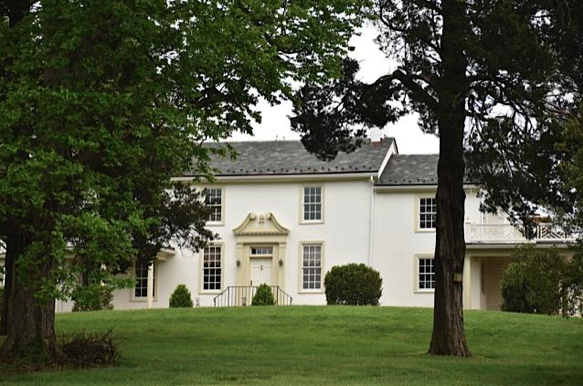 The complex at Eastwood is a jewel of local vernacular architecture. Structures slated for demolition have been painstakingly dismantled and moved to their present site. The 1760 section of the main house is listed on one of the earliest deeds in the newly established Fauquier County. A Greek Revival-style drawing room and dining room, with rare Zuber wallpaper, date from the 1830s. The nine-foot entrance to the sunken drawing room of the 1920s was recently restored using a DuPont-era door salvaged from the restoration at Montpelier. Other structures of historic and architectural importance include the 1780 Balch House where the son of the tutor to George Washington’s stepchildren’s lived for a time, a red-sandstone meat house c.1860 from land originally part of the Kettle Run grant given to Robert Carter, and a stone barn c.1801 that sheltered women and children during the Manassas campaigns of the Civil War. The gardens consist of a series of boxwood rooms containing herbaceous borders lled with tulips, daffodils and other spring bloomers. Whimsical sculptures such as a hound chasing a hare emerge from one bed, a stele of Tennessee stone stands guard under a magnolia tree and a pair of doves commemorating the peace talks between Gorbachev and Reagan emerges from the herb bed near the house. Opened for the rst time since 1989 by new owners. 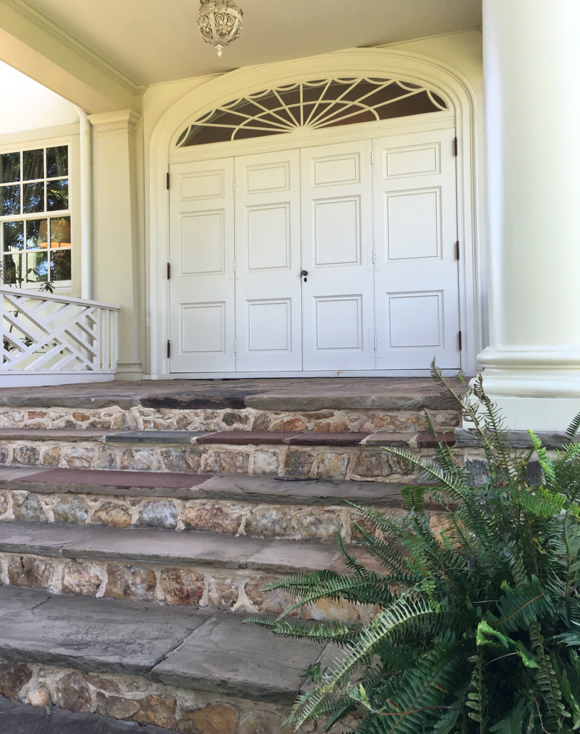 The doors of Eastwood, and other historic homes and gardens, open up for Virginia’s Historic Garden Week